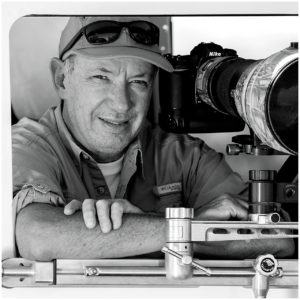 When Gerhard was thirteen years old, in Ladybrand High School in the Eastern Free State, South Africa, he discovered photography while playing around with his mother’s Kodak instamatic camera. To her big frustration, she had to pay for the development of all the films!

This camera stayed with him throughout his high school career, and two years after high school, while spending eighteen months in Namibia (Ovamboland) during the South African Border War in the nineteen-seventies. He still remember how he tried to capture the beautiful sunsets of Namibia with his Kodak.

In 1980 he enrolled for a B.Ed degree at the University of the Free State, with Geography as one of his subjects. In January 1984 he started as a Geography teacher and for the next twelve years he spent his time in the classroom.

When he bought his first “real” camera in February 1984, after just one month in the teaching profession, a lifelong passion began. First, as an amateur, but in 1996 as a full-time photographer, earning money solely from a freelance career as photographer.

During his teaching career, he spent a lot of time practising and sharpening his photography skills. At that stage he had already started to earn money from photography, covering sports events, weddings, school dances and portraiture.This helped him to buy decent equipment. He bought his first 300-mm F2.8 lens in 1992.

Since 1996 he have covered rugby, cricket, swimming and soccer at the highest level. Sports photography was where he started off and this progressed to many other genres.

Some of the highlights during this period were: The British Lions’ tour to South Africa in 1997, three Swimming World Cups, the Soccer World Cup in 2010 in South Africa and the ICC Champions Trophy in 2009 (cricket). He had more than thirty front-cover photographs on sports magazines, such as Sports Illustrated, SA Cricket Magazine, SA Rugby Magazine and Rugby International. These achievements will always be highlights of his career.

In 2011 he began specialising in wildlife photography, which meant that a long learning curve started all over again. He is still learning – and this process will probably never end. This also meant a total career change. Today he is proud to call himself a full-time wildlife photographer.

Since January 2012 he have spent most of his time in the Kalahari region, capturing the essence of wildlife and their habitat.

Not a day goes by without taking, editing or browsing through photographs. To him photography is a way of living.

When shooting out of his vehicle(which is most of the time) he is using a Gimpro door bracket and gimball head to keep the 600 mm lens sturdy.

With more than 30 years experience, he is willing to share his love and passion for photography with you through his services rendered;